(this article refers to this one which is written in German)

The Germans should include a clause in our „Grundgesetz“ called constitution that no opening ceremony for any international event should be held in Bavaria (which rejected the Grundgesetz in 1949…). 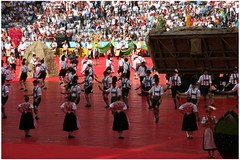 Some weeks ago I was joking about the German image in the world which has been transported by a commercial clip – but I think these stereotypes aren’t appropriate for the official opening ceremony of the soccer World Cup 2006.

This World Cup is being held in Germany as far as I know – not only in Bavaria. I think it’s not alright, when you see only typical Bavarian stereotypes (leather trousers, dirndl, schuhplattlers (Bavarian folk dance), men ringing cow bells and so on) at the official ceremony for the World Cup in Germany.

It seems to be that the organization comittee reduces Germany only to Bavaria. What a pity – and it fits very well what Lyssa wrote at weallspeakfootball.com:

The opening ceremony was rather â€¦ bizarre. Exploiting old stereotypes about Germany might help promote the „Europe in 5 days“-tourism (Rothenburg in the morning, Neuschwanstein for lunch, shopping for Dirndls in Munich around teatime, forget about your aching feet while downing the second beer at the HofbrÃ¤uhaus and feel like you really know about Germany), but it didn’t have much to do with real life in Germany 2006. Watching it felt a lot like watching the old movies that my Grandma used to like.

PS: The picture above has been made by the trachtenverband-bayern.de.

PPS: I don’t have something against these typical Bavarian stereotypes – but I don’t like it, when these special Bavarian things are taken for the whole Germany.

RSS feed for comments on this post. TrackBack URI.